The Asylum Laws and Procedures in U.S.

The Asylum Laws and Procedures in U.S.

Whether to seek asylum in the U.S. is an extremely important decision that should be made in consultation with an immigration attorney. Asylum seekers are those who are already present in the U.S. and desire to apply for this benefit. Being granted asylum places the individual into asylee status which is indefinite. Work permits are issued during this time. After one year in asylee status, the individual becomes eligible to seek permanent residency in the U.S., a green card. If granted, the individual will then be on a pathway to U.S. citizenship.

Many asylum seekers are those who entered on a visa. Others have entered without inspection, and yet others have presented themselves at a port-of-entry to request asylum. If the foreign national is not in removal proceedings before an immigration judge, he or she will submit their asylum application to U.S. Citizenship and Immigration Services (USCIS) and attend an asylum interview at their nearest asylum office. If granted, the individual becomes an asylee. If not granted, the case in most circumstances is then referred to an immigration judge and the individual is accused of being removable from the U.S. However, the foreign national can again present their asylum claim before the judge. 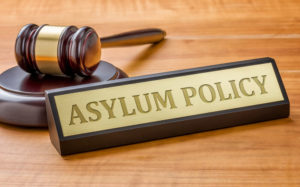 Asylum Laws and Procedures-How to Win an Asylee Status?

Because unsuccessful asylum seekers who are undocumented are referred to immigration judges by USCIS, it is important to fully understand the strengths and weaknesses of one’s case before applying. Asylum is meant to protect individuals from future persecution. However, one must apply within the first year of physical presence in the U.S., although there are some exceptions to this rule. To win asylee status, one must demonstrate that he or she has a well-founded fear of future persecution on account of one of five reasons: race, religion, nationality, political opinion, or membership in a particular social group. In other words, the fact that one was severely harmed in the past does not mean that he or she is eligible for asylum. The motive or reason for harm must also be shown and must align with at least one of the five grounds above. This is commonly known as the nexus requirement. Without showing a nexus to a protected ground, one cannot prevail in their asylum claim. Seek the help of an Austin immigration Attorney.

If any required element of asylum cannot be met, the individual faces great risks in applying before USCIS because they will likely end up facing an immigration judge without a good chance of winning their case. That is why seeking legal advice is crucial in making this decision. Contact our Austin lawyer or call us at 512-952-2176 to review your asylum application.